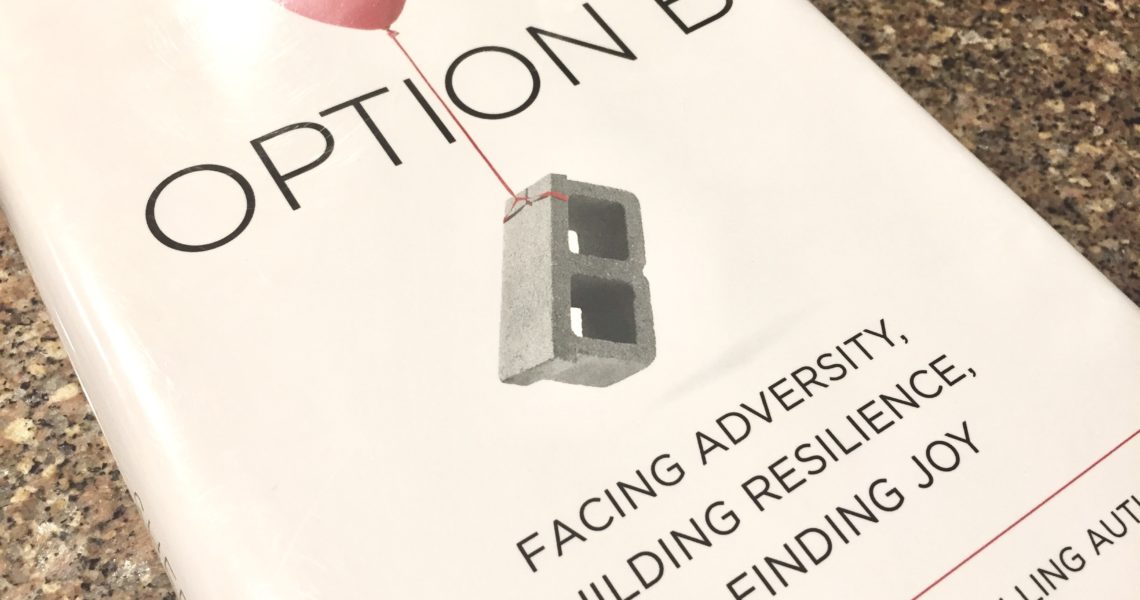 I ran across this book during my own personal journey in search of what the Lord would have me to do next with my life. I have been going through what seems to be a death of a dream, and navigating such feelings and going through the process is not exactly simple or easy. When I saw this book, I thought it would be great. I basically read the title and thought, That’s what I need. Facing adversity, building resilience, and finding joy – all the things I have been going through. When I began the book, I was shock to find it about unexpected tragedy and began to wonder if I made the wrong decision. Then, I pretty much caught myself. I have a genuine love for the ironic. Perhaps, this was just the right book for where I am now.

Option B is authored by Sheryl Sandberg, who unexpected found her husband, Dave, dead on the couple’s trip to Mexico. They were married for 11 years and had two kids together. Suddenly, all of that was gone. Two weeks after losing her husband, Sheryl was preparing for a father-child activity and didn’t know how to respond or move forward. “I want Dave,” she cried. Her friend replied, “Option A is not available,” and then promised to help her make the most of Option B. This is the premise of the book: that we all live some form of Option B.

“We plant the seeds of resilience in the ways we process negative events.” [p16]

I loved how she began with resilience. She takes us on a journey through the 3 P’s by psychologist Martin Seligman who explains how we stunt recovery when we deal with setbacks.

This is displayed in the mindset that says: “It’s my fault this is awful. My whole life is awful. And it’s always going to be awful.”

“Recognizing that negative events are not personal, pervasive, or permanent makes people less likely to get depressed and better able to cope.” [p16]

“Seligman found that words like “always” and “never” are signs of permanence … [so, it is best to]  replace them with “sometimes” and “lately”. “I will always feel this awful” became “I will sometimes feel this awful.” Not the most cheerful thought, but still an improvement. [p21]

Sandberg builds on those three with what she calls “lean in to the suck”. When you are going through a setback, you also have to deal with knowing you are going through a setback and the feelings associated with it. C.S. Lewis wrote, “Part of every misery is misery’s shadow … the fact that you don’t merely suffer but have to keep thinking about the fact that you suffer.”

Sandberg next discusses the relationship of a friend to a hurting person. She found that in her grief, most people would not bring Dave up or ask how she was for fear of upsetting her. She goes on to say how that is wrong thinking and that grieving people need to know that their lost will be remembered. She quotes the golden rule, do unto others as you would have them do unto you, but she added what she calls the platinum rule.

“Caring means that when someone is hurting, you cannot imagine being anywhere else.” [p50]

“Platinum rule: treat others as they want to be treated.” [p51]

“Friendship isn’t only what you can give, it’s what you’re able to receive.” [p54]

Then, there are the 5 stages of grief by psychiatrist Elisabeth Kübler-Ross: denial, anger, bargaining, depression, acceptance. Sandberg says, “These are not so much stages as they are expressions – you can go through them at different degrees at different times.” [p55]

However, the greatest accomplice to healing is self compassion, the ability to show ourselves kindness.

“Self compassion: offer the same kindness to ourselves that we would give to a friend.”  Kristin Neff (psychologist) [p60]

“Self compassion can be an antidote to the cruelty we sometimes inflict on ourselves.” Mark Leary (psychologist) [p60]

One of the strategies Sandberg used to “move on” and obtain resilience was to make a list of three things she did well [p68]. She would religiously journal this every evening to remind herself that she was improving and moving forward.

A second strategy was to find meaning in her work and serving others through her grief. And lastly, she strived after and purposely chose to be joyful.

“The jobs where people find the most meaning are often ones that serve others … meaningful work buffers against burnout.” [p88]

“Tragedy does more than rip away our present; it also tears apart our hopes for our future. … the disappearance of one possible self can free us to imagine a new possible self.” [p91]

“Tragedy breaks down your door and takes you prisoner. To escape takes effort and energy. Seeking joy after facing adversity is taking back what was stolen from you.” [p99]

Sandberg goes on to share how to inspire resilience in children. This was her biggest fear – that her kids would not recover from the grief of their father’s death. She quoted studies from the last book I read, so it was familiar territory to see how resilience is a necessary component to success all through life. We build resilience in children by having our focus and praise based in the effort exuded. Praising children for trying causes them to work harder and make more of an effort to finish. Praising kids for being smart causes them to feel they don’t have the ability to complete difficult tasks.

“Building resilience depends on the opportunities children have and the relationships they form with parents, caregivers, teachers, and friends. We start by helping children develop four core beliefs: (1) they have some control over their lives; (2) they can learn from failure; (3) they matter as human beings; and (4) they have real strength to rely on and share.” [p111]

“Psychologist Carol Dweck has shown that children respond better to adversity when they have a growth mindset instead of a fixed one. I fixed mindset means viewing abilities as something were either born with or not. A growth mindset sees abilities as skills that can be learned and developed. They can work to improve.” [p113]

She ends the book with encouragement to learn from failure and grief. By choosing to learn we become less defensive and more open.

“With the right support, beliefs can fuel action and become self fulfilling. Believe you can learn from failure and you become less defensive and more open. Believe you matter and you spend more time helping others, which helps you matter even more. Believe you have strengths and you start seeing opportunities to use them.” [p118]

This book came at a good time in my life. Pain often literally marks us. Our brains mark pain receptors so that we have a mental image of an event and the pain associated with it. The brain does this for our defense. But, many times that defensive mentality paralyses us from moving forward. I am reminded of the difficult journey of Joseph. From the pain of betrayal, being lied about, and having to prove himself over and over again, he emerged with grace for the people he ruled over and ended up saving the very ones that betrayed him. As a way to remember the journey, he named his first child Manasseh, which means the Lord has caused me to forget. But his journey was not all pain. He was resilient. To honor that and the God who brought him through hardship, he named his second child, Ephraim, which means the Lord has made me fruitful.

“Nostalgia” comes from the Greek words nostos and algos, which means “return” and “pain”. Nostalgia is literally the suffering that we feel when we yearn for the past to come back to us. [p124]