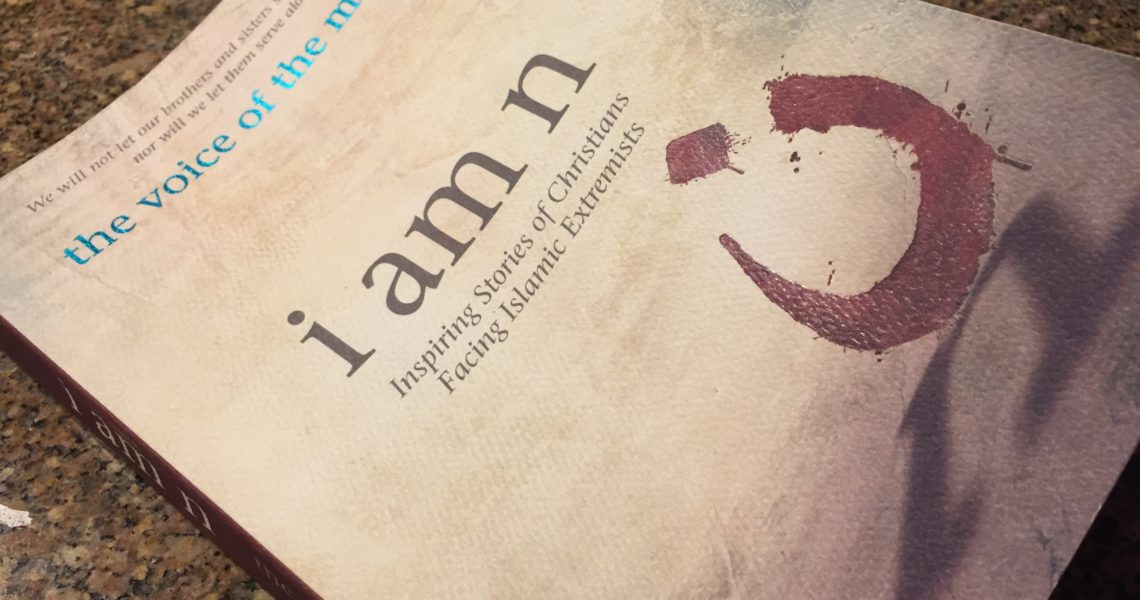 I ran across this book a month ago at Hobby Lobby. When I saw it, I was intrigued. I picked it up and read the first few pages. This book is about the every day risks and persecutions Christians face in ISIS controlled areas. In the beginning, many were faced with three choices: convert to Islam, pay an extremely high tax, or death. However, in more recent days, the choice is simply convert or die.

When militants from the self-proclaimed Islamic State of Iraq and Syria (ISIS) moved into northern Iraq, they began identifying Christian-owned property. Families would find the Arabic letter ن (nun, noon), or n, painted on their homes and churches. This single letter conveyed the powerful accusation that the occupants were “Nazarenes,” people who follow Jesus of Nazareth rather than Islam.

To be labeled “n” in the community dominated by Muslim extremists is to undergo an immediate identity and life change. … Any person who takes a stand for Jesus in occupied Iraq, any person who chooses to be “n,” pays a high cost. [Pg. 15]

The book is written to tell the short stories (3-4 pages) of individuals who have been the subject of the persecution. Many of the stories are of those who have been delivered one way or another by God, escaping being forced into service to ISIS, beaten, mutilated, or left for dead. There is story after story of forgiveness and God’s faithfulness.

One story is of a father, Diya of Somalia, who loved the Bible and passed on the love of it to his 6-year-old son, Amiir. Amiir took the Bible out one day (innocent of the risks) and was reading it on a crumbing curb by the street. A vehicle pulled up with two soldiers, members of the Islamic Court Union, and asked him where he got that book. He simply said from his papa and pointed inside the house. The men charged the house and, after a serious exchange, Diya refused to convert. He was shot (and miraculously survived). However, the gunmen turned on his young boy (who knew no different) and shot him in head. The bullet went through him and into his mother’s stomach. Both died. The father lost both his wife and child, yet forgave the murders and desired for them to know the love of Christ. [Pg. 221-223]

In another story. Danjuma of Nigeria (13-years old) was caught in an attack from about 1,000 Islamic insurgents. Like the rest of the village, he tried to escape but could not. He felt the slice of a machete through the left side of his head and a blow to his left arm. His eye was gouged out with a knife and his genitals were cut off. The next day, as the dead were being buried, they realized he was still alive. Amazingly, he survived and they nicknamed him “Miracle”, not only because he was alive, but because he came out with total forgiveness for his attackers because they had not known the love of Christ otherwise they would not have done it. [Pg. 197-199]

One last story is of John and Mary of Afghanistan. John’s father was a Taliban leader and John was a devoted follower until, on a journey to Mecca, John had a dream of Jesus that changed his life. When John returned home and told his father of his love for Jesus, John’s father held him captive, beat him, put him in a snake pit, released a vicious dog on him, and threatened to kill his wife and child. John remained faithful and God moved powerfully. He was released and ignored his father’s demands to not speak about his faith. His wife, Mary, believed and trusted in Jesus. Mary was pregnant and when she told her father of the pregnancy, he told her that John was an infidel and that she should abort the baby. Mary shared her faith in Christ as well and her father slammed her face into the ground, shattering her teeth. He beat and kicked her and punched her several times in the stomach. He dragged her to John’s father’s house where John’s father joined in on the beatings. The Taliban leaders ordered John’s father to kill them. The mothers of John and Mary conspired to save their lives and safely got them out of the country. John’s father learned of the plot and killed his wife with rat poison. After John and Mary fled Afghanistan, John took Mary to the doctor where it was discovered that the baby was dead. Mary was going to die too if the fetus was not removed. However, they could not afford the procedure. So all John could do was pray. The next morning his wife was standing by the door calmly sipping tea. They baby was alive. They returned to the doctor and it was confirmed. It was a miracle and several people at the doctor’s office turned to Christ. [Pg. 247-251]

There are several amazing stories that are nearly unfathomable because of the freedom to worship we enjoy in the US. It is a sobering read of the genuine power of the gospel to those who believe.